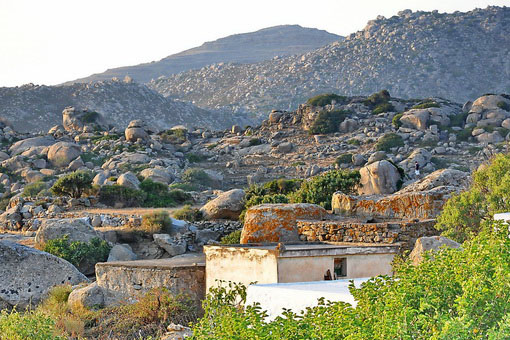 The picturesque alleys, the traditional Cycladic architecture, the narrow marble streets, the plane trees, and the cobble-paved squares are typical of almost all Tinos villages.

Pyrgos is the largest village on the island. It is a place where trade flourished, but also did arts, since some of the most important Greek sculptors and painters were born there. It resembles an architecture museum, seeing that carved marble richly adorns every corner of the village. At the same time, a walk in the village always leads to the main square, where enjoying sweets and coffee under the enormous plane tree is a must.

Kardiani is one of the most beautiful and verdant villages of Tinos. The unique architecture, the view to the neighboring island of Syros -especially during sunset- and the picturesque cobble-paved alleys, along with the houses that are full of flowers make Kardiani a truly one-of-a-kind village.

The picturesque village of Isternia is located about 20 km away from Chora and is close to the village of Kardiani. It is built amphitheatrically on the slopes of Mount Meroviglia, so, apart from the typical Cycladic architecture, you can also enjoy a panoramic view of the island of Syros and the Aegean Sea. There, you will also find the Isternian Artists Museum and some deserted windmills, along with a small path that starts from the village and leads to Isternia bay.

The village of Volax or Volakas is in a unique location, surrounded by huge granite boulders that create a captivating lunar landscape. In many corners, poem inscriptions can be found on old doors or windows. The village also has a Folklore Museum, as well as many shops where you can buy the well-known Volax baskets, still knitted by the locals to this day.

Panormos is a seaside resort located in an enclosed bay, only 3 km away from the village of Pyrgos and about 25 km from Chora. It is a small fishing village with several traditional taverns. Across the village, the small island of Planitis, on which a deserted lighthouse stands tall, can be seen.

Dyo Choria is one of the most beautiful villages of Tinos, with a strong medieval atmosphere and a magnificent view of the neighboring Cycladic islands. Within about 9 kilometers from Chora, Dyo Choria creates a picturesque setting with the main square, the plane trees, the traditional fountains, and the cobbled alleys.

Falatados is the second largest village of Tinos after Pyrgos and is 10 km away from Chora. The village is famous for the local raki drink, with various festivals celebrating the raki preparation period taking place there. The church of Agia Triada (Holy Trinity) is a place worth visiting, while a stop at the main square to try the famous raki is a must.

Aetofolia is one of the highest-altitude villages on the island and is also known as “the Mountain of the North”. Aetofolia offers one of the most beautiful natural landscapes on the island and has some paths of exquisite beauty that will bring you closer to the mountainous side of Tinos. The typical white Cycladic houses, along with the stone-paved alleys and the blossomed yards immediately capture the visitors’ attention.

Agapi is a picturesque village with white houses that emerge through a verdant landscape. It is one of the oldest villages of Tinos, at a distance of 14 km from Chora. During the Middle Ages, it was known as Perasma, meaning “passage”, seeing that it led to the then capital of the island. There, you will admire cobble-paved alleys, arches, dovecotes, and fountains through which the water of the village springs flows.

Arnados village is built on one of the highest points of Tinos, on the slopes of Kechrovouni. Located 9 km away from Chora, the village stands out for its unique architecture featuring Medieval arches. A stop at the large square of the village with the majestic view of the Aegean Sea is an absolute must.

Platia is located after Isternia, down the road to Pyrgos. It is a traditional settlement of Tinian architecture heavily based on the use of stone and marble. It has also been the birthplace of several great artists.

The main feature of the Tarambados village is the dovecote valley. The walk from the village to the 20 restored dovecotes is a greatly enjoyable experience.

Moreover, the villages of Tripotamos, Loutra, Kalloni, Koumaros, Mountados, and Mirsini are some other Tinos villages totally worth visiting during your stay on the island of Tinos! 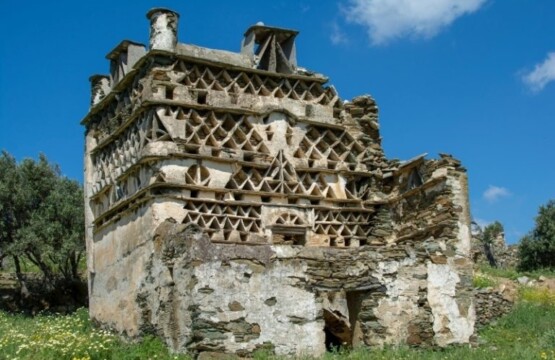 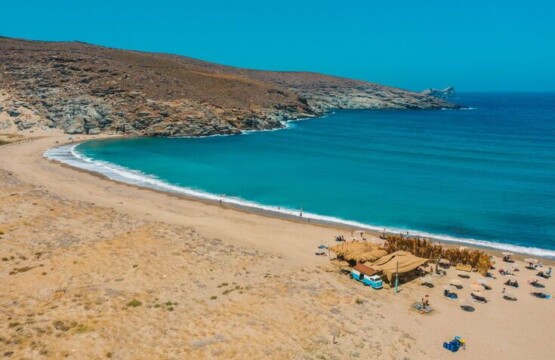 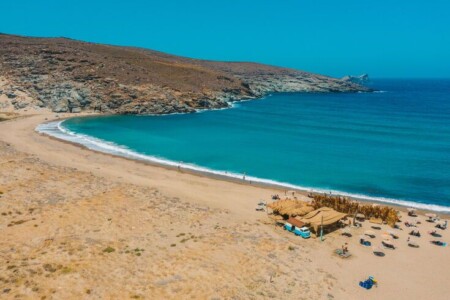 Explore our selection of Tinos beaches. 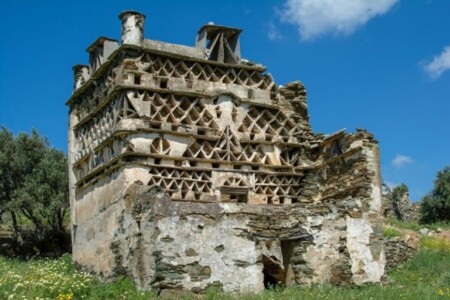 Tinos is full of attractions and is called a “handmade island” or “island of artists“. It is the birthplace of… Read More

How to get to Tinos

Are you planning your next trip and wondering how to get to Tinos? Organize your trip starting from the absolute basics. During the summer months, Tinos attracts a great number of visitors, so you should make sure you book your ferry tickets, accommodation, and transportation in time. The following information will help you choose the most suitable way for you and help you start your vacation under the best possible conditions.

There is no airport on the island of Tinos and the closest one is located in Mykonos.
Mykonos International Airport connects the island with Athens International Airport “Eleftherios Venizelos” and Thessaloniki Airport “Makedonia”. Mykonos is a favorite destination among people from all over the world, so the airport receives flights from across Europe. From Mykonos, you can reach Tinos by ferry and the trip lasts 30 minutes. 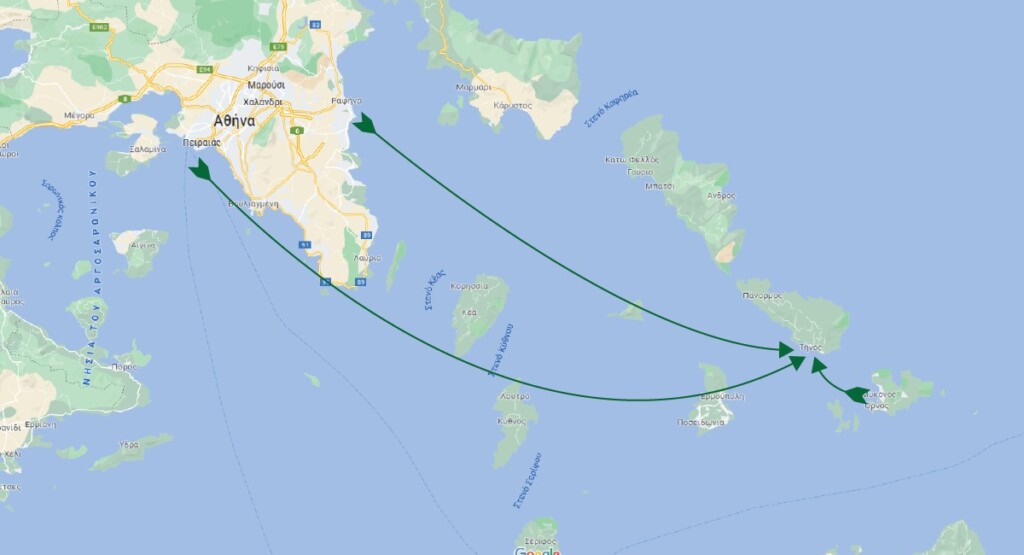 How to get to Tinos

You cannot go to Tinos by airplane, as the island does not have an airport. Nevertheless, you have the option of traveling to the neighboring islands of Mykonos or Syros by airplane. From there, there are daily ferry trips, which are only half an hour away.

For itineraries to Tinos & ticket reservations you can visit the companies’ official websites (BlueStarFerries, FastFerries, GoldenStarFerries) or contact the local travel agencies on the island.

Are you wondering how to get to Tinos? Tinos Rental gives you all the answers.

Please enter your username or email address. You will receive a link to create a new password via email.